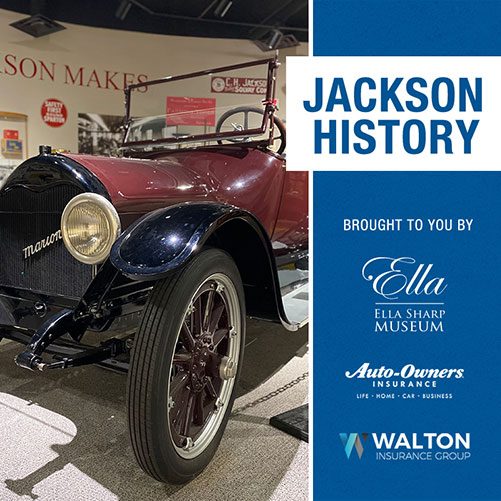 Early 20th century Jackson was an automobile boom town. There were 25 different auto manufacturers here during the first few decades of the 1900s of varying size.

Carter, for example, began as a bicycle company in the first decade (1900s), before translating their expertise into spoke-wheeled cars. Briscoe and the Jackson Automobile Company, on the other hand, manufactured tens of thousands of automobiles. Briscoe touring cars were very popular in Europe during the 1920s and were shipped overseas in large number.

By 1927, the Jackson Chamber of Commerce estimated that over half of all working men in Jackson worked in the automobile industry in some form. Of these 25, only Buick survives to this day, though they are no longer made in Jackson, MI.

This Marion, vehicle number 7032, is a 1916 Model K with a 6-cylinder engine. It was manufactured in Jackson by Mutual Motors Co (formally known as Marian Motors Co.). The company moved to Jackson in 1915 to join the automobile boom, merging with Jackson native company Imperial to form Mutual Motors Co. Mutual Motors became Marion-Handley the following year, and produced 4- and 6-cylinder cars.

Mutual Motors never adopted the assembly line techniques pioneered by Henry Ford and each car was custom built requiring more time than the faster assembly line process. The company ceased operations in early 1918 after a total of 1541 cars were produced.

This Marion, located in the Ella Sharp Museum galleries, was one of two cars loaned to the museum in 1973 by Walker Manufacturing Company. This loan became a donation in ‘84, and both were transferred to Ella Sharp Museum ownership in ‘87.

Our Marion is unique because, while almost all cars manufactured by Mutual Motor Co. in Jackson were Marion-Handleys, this one is technically a Marion. Marions were made for only a few months (Nov.1915 – Feb. 1916) after Mutual formed, before Marion-Handleys became the representative model. Marions were rare even then, and it is likely that ours is the only one in existence.

This week’s Jackson History is brought to you by Walton Insurance Group and Auto-Owners Insurance.

Ella for All Program